One year on and some community members are still recovering after the devastating fires on the Yorke Peninsula.

Due to extreme weather conditions two separate fires broke out on Wednesday 19th November – one at Price and the other at Yorketown. Community members had to enact their fire plans and many started their evacuation to safer grounds.

By 1.00am on Thursday 20th November, the Yorketown fire escalated due to the continuing strong winds and more community members were woken by emergency services to evacuate. By 6am, the wind changed direction and the residents of Edithburgh were then under threat.

Mayor of Yorke Peninsula Council, Darren Braund who is also a resident of Edithburgh has been reflecting on the past year.

“Firstly, I would like to acknowledge the courage and resilience of our community” said Mayor Braund.

“Despite the obvious devastation I can now see with the passing of time, that there have been some positives from this experience. First and foremost it was the genuine care, generosity and support that I saw within the affected communities. Second was the agility and cooperation of Council staff.

Before these fires even started, Council staff had warned the community about the extreme fire danger rating via Council’s Facebook page. Then as soon as the situation was known, staff were sharing information from emergency services through our Facebook page (updates at 2pm, 4pm, 10pm and then 7am). By this stage staff had also developed a web page with critical information in an attempt to keep the community informed.

One of the key actions were text messages that were pushed out to every camper with a bush camping permit to alert them to the danger and advising where their closest bush-fire refuge could be found.

A camp for the Blazeaid volunteers was set up Light Church in Edithburgh and many joined with the organisation to help local farmers re-fence properties.

Very quickly, through the State Recovery Office, a local Fire Recovery Committee was established where I was joined by Council’s CEO and the Director Development Services. A space was set up in the Yorketown Town Hall to act as a hub to coordinate recovery efforts and offer support (financial, physical, and emotional) to local residents. Council continued to work with the Fire Recovery Committee and local residents to help out with whatever was needed – whether that was loaning out Council’s plant and equipment, starting the vegetation process through to disseminating critical information.

To lessen the financial burden on affected residents, Council agreed to waive all Development Application fees for those who had damaged and/or destroyed property as a result of the fires until 1 July 2021.

Then in July 2020, the State Government funding for the Local Recovery Co-ordinator was going to cease so Council stepped in and agreed to financially contribute a weekly amount to continue to fire recovery support up to the 12 month anniversary of the fires. Furthermore, Council worked hand in hand with the Local Recovery Committee to plan, develop and launch the new monument at Honiton.

In the aftermath of the fires, Council has been fortunate to secure multiple streams of grants which has funded various projects such as the Southern Yorke Peninsula Water Tower/Tank Art Trail, revegetation projects, especially around the Goldsmiths Beach bush camp which was completely burnt out and also the purchase of critical water storage”.

Mayor Braund then thought about the ‘lessons learned’ throughout this experience. His response was:-

With the new recent COVID lockdowns or the Yorketown Bushfire Anniversary people may be experiencing difficulties during these challenging times. Please know there are many support services outline in the below documents available to assist you through this.

BlazeAid Edithburgh: This video is an excerpt from a documentary on the BlazeAid effort over the 2019 fire period. 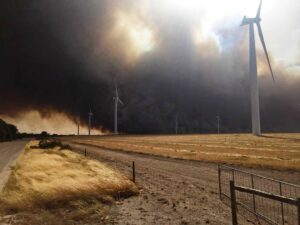 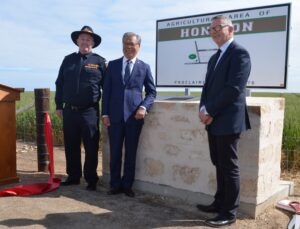